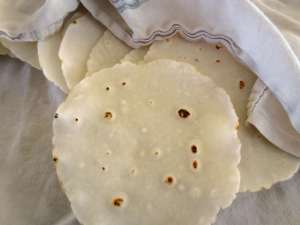 Use a cast iron skillet (or comal). I was using a T-fal griddle pan for a while, but the cast iron does much, much better.

Do grease the skillet. If you have a seasoned skillet it’s not as important, but it helps a lot. I recommend lard for this. Only use enough to get a thin layer and re-coat every 2 or 3 tortillas. If you’re vegan, palm shortening would be a good substitute.

Use lard. I have used palm shortening before and, while it works, it just isn’t as good. If you’re vegan, palm shortening is a great option. If not, invest in some lard, you won’t regret it.

Warm water. Most flour tortilla recipes call for cold water. While cold water works, it adds more prep time because you have to cut the fat in really well before you add the water. Using warm water melts the fat a little, helping it distribute evenly through the dough which makes the cooked tortilla better.

Medium heat, short cook time. If you want flexible tortillas don’t cook them for longer than 1 minute and 30 seconds. If you overcook them, they’ll break when bent.

Do not skip the xanthan gum. Seriously. Do. Not. I was out once and I thought I’d just sub in some almond flour for the rice flour because almond flour is good for texture in gluten free stuff like pizza crust. Wrong. My tortillas just broke apart. The xanthan gum is for texture and structure, it is not optional.

Use a tortilla press. Press your dough first and then roll it out with a rolling pin. This way you get a more even looking tortilla.

Cover the cooked tortillas. They will dry out quickly otherwise.

My name is Jennifer Fitch. I'm married to an awesome nerd and we have 2 children. I've recently discovered my love of food. I want to talk about it all the time! Realistically, not very many people share this interest in food conversation so I created a blog as an outlet to share the things I learn about nutrition and my favorite recipes.